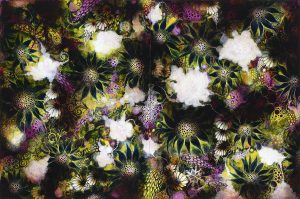 Carrie Lederer’s intricate and delicately handled paintings and sculptural objects evoke the Victorian naturalia of glass globes, cameos and portraits in which flowers were ethereally suspended, and nature was viewed as a manifestation of cosmic powers. Tangle in the Garden is an 8” wooden disc over which Lederer paints a glistening entanglement of invented floral botanicals. Its feeling of embalmed nature gives it a strange and somewhat gothic beauty. Above and Below is a vintage wooden cigar box that she painted with botanical imagery, almost hallucinogenic in its obsessively layered detail. It, too, is reminiscent of the sort of collectible Victorians would display in conservatories and salons. Wondrous Strange is a tour de force of patterning and invention. Meticulously painted curled forms and snowflake flora give it a psychedelic vibe, bringing to mind the realist, visionary paintings of San Francisco painter Bill Martin (1943-2008).